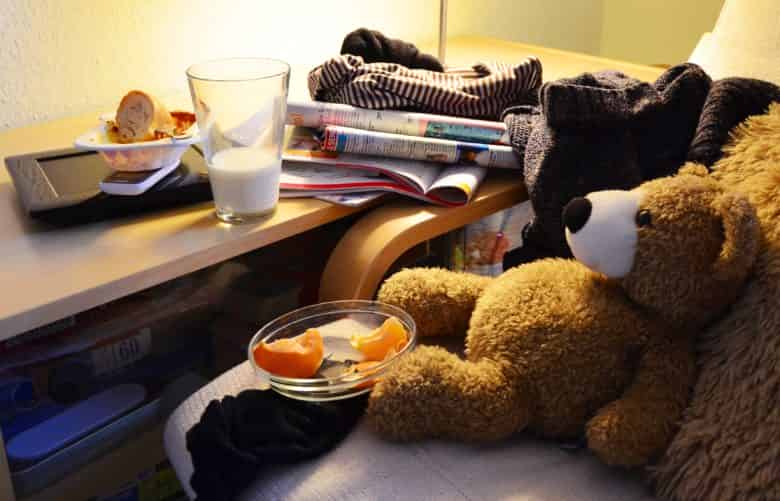 The precious messes that come with motherhood

I originally wrote this in April of 2015 when my son was 2 and my daughter was 5-1/2. I have learned that motherhood and messes really do go hand-in-hand, even now that my children are older. The messes might change, but they’re still there!

Last week my son was in the middle of eating breakfast and decided he wanted a big hug. The little dude is the snuggliest of my children and often asks specifically for big hugs or just comes over and cuddles at any given moment. Resisting a 2-year-old asking for a big hug is impossible. I reached over to him and he stopped me for a moment.

“Get you messy,” he said, looking at his fingers that had some goo on them from his cereal bar, implying that he would indeed transfer it to me. I looked down at my own pajamas and told him it was OK. I didn’t mind. And I truly didn’t. We carried on with our big hug and somehow I didn’t get any goo on me. I wouldn’t have cared if I had. In fact, I have gotten “gooed” before.  It wiped off; I survived.

A few months ago, he was eating the same kind of cereal bar (they’re favorites around here) and somehow I ended up with a smudge of strawberry goo on my face. I washed my face and got ready for the day and totally missed it. I thought it was a blemish. A few HOURS later, I realized that it was goo from a cereal bar that I hadn’t eaten. All I could do was laugh.

Learning to embrace the mess of motherhood

Children are messy. Motherhood and messes go together. I have gotten in worse messes with my kids that are much less pleasant than stray cereal bar goo. There have been gross bodily fluids. I still have one child in diapers and am dealing with those messes throughout the day. That’s not to mention extra stuff that goes along with sick little ones. And let us not forget the toys and mess that occurs when playing.

We have just put our house on the market to move closer to the interstate for my husband’s commute and I am trying to keep the house clean. I have deep cleaned and organized. I did this while the kids enjoyed grandparent time. Within 5 minutes of their return home, I found toys on my kitchen, dining room and hallway floors. My 5-year-old is pretty good at putting her things away. My 2-year-old, though, is like a roving toy tornado who lets no toy go unturned. Messy.

I’m not sure any aspect of motherhood is clean. Even when we are sitting together reading books quietly, there are still noses to wipe or fingers that are slobbery because they’ve been sucked on. That’s just how kids are. I must also admit that I have never been a kid person. Some women love kids and babies since they were young themselves. I was never one of them. Honestly, I didn’t know what to do with kids. I didn’t know how to talk to them. And I surely didn’t want to be in charge of cleaning up their messes.

Now that it’s my own kids I don’t mind one bit. I don’t give a second thought to wiping noses and bottoms, cleaning off messy hands, picking up toys over and over again. OK, maybe I do give that last one a second thought sometimes. We’re working on everyone putting away their own things, but it is most certainly a work in progress. Mess just goes with the territory of motherhood.

The messes yet to come

I have thought maybe that will change as my kids get older, but I don’t think it will. The types of messes will change, in that I won’t be looking at a Little People Superman and his plastic dinosaur pal lying on my dining room floor in another 10 years, but there will still be messes. There will be school papers and maybe athletic equipment or musical instruments. There will be muddy footprints from being outside and running back into the house without thinking. I’m sure there will be laundry dropped to the floor instead of in the hamper. There will always be messes with motherhood as long as kids are around.

Even once they have left home, they’ll still bring their messes back with them. Messes go with people. We all have some degree of messes that alerts the world to our presence. And moms don’t mind. I’m guessing once they’ve left home that when they come back with bags of dirty laundry or eventually their own messy kids that I won’t mind nearly so much. I’m guessing I’ll be thankful for that mess to be back in my house because one of these days, I really might miss it.

Knowing that makes today’s messes just a little bit easier to clean up. Knowing that one day my daughter will be off on her own in college and not need me nearly so much makes me want to sit and hold her close in the midst of the toys. And knowing that one day my son will be off on his own and no longer wanting to snuggle with messy hands and face makes me want to hold him all the tighter now and get as messy as it takes.

The mess of motherhood, dare I say, is a precious one. So, go ahead, kid, give me a hug with your gooey, sticky hands. The mess will wash away while the memories will always remain. 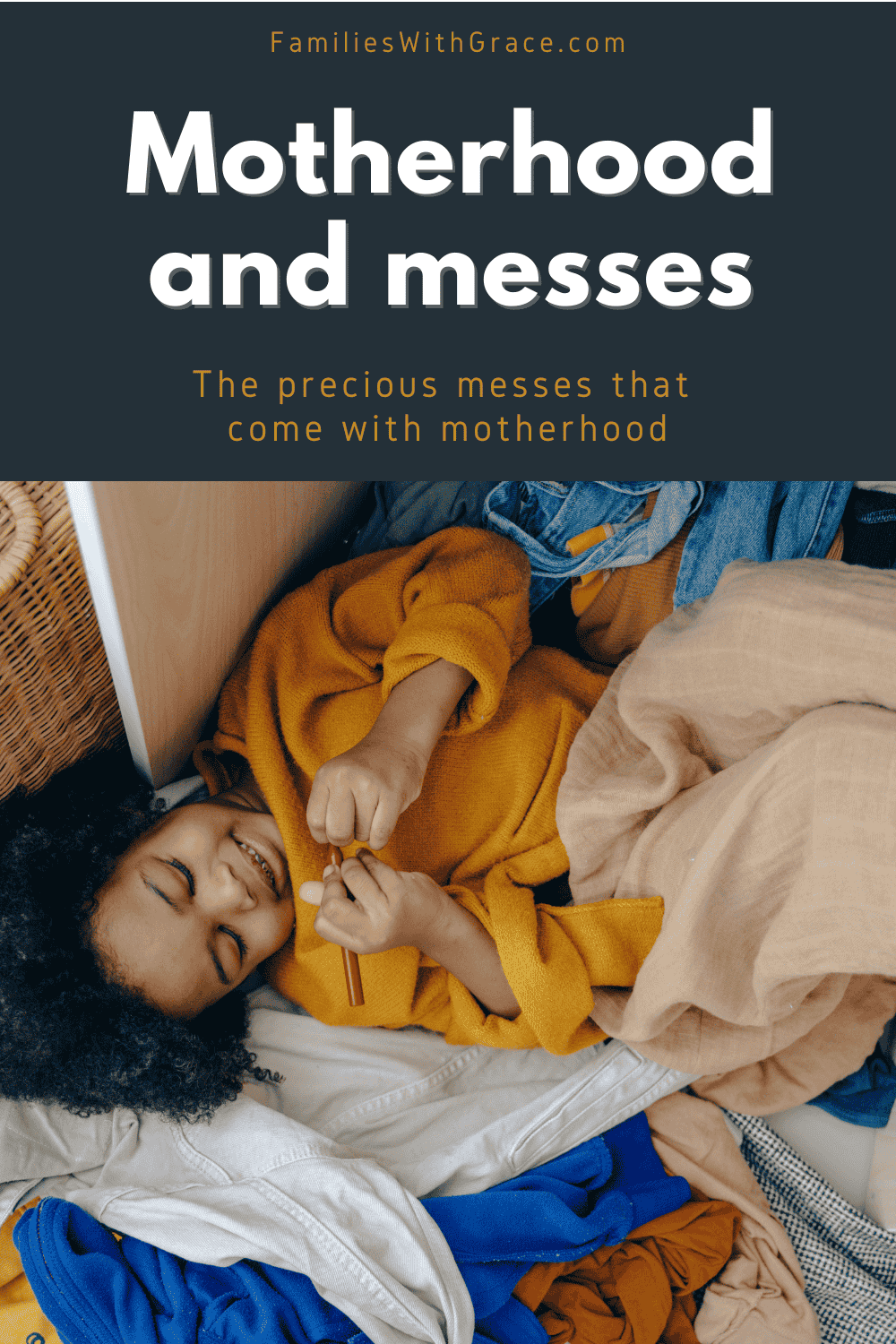 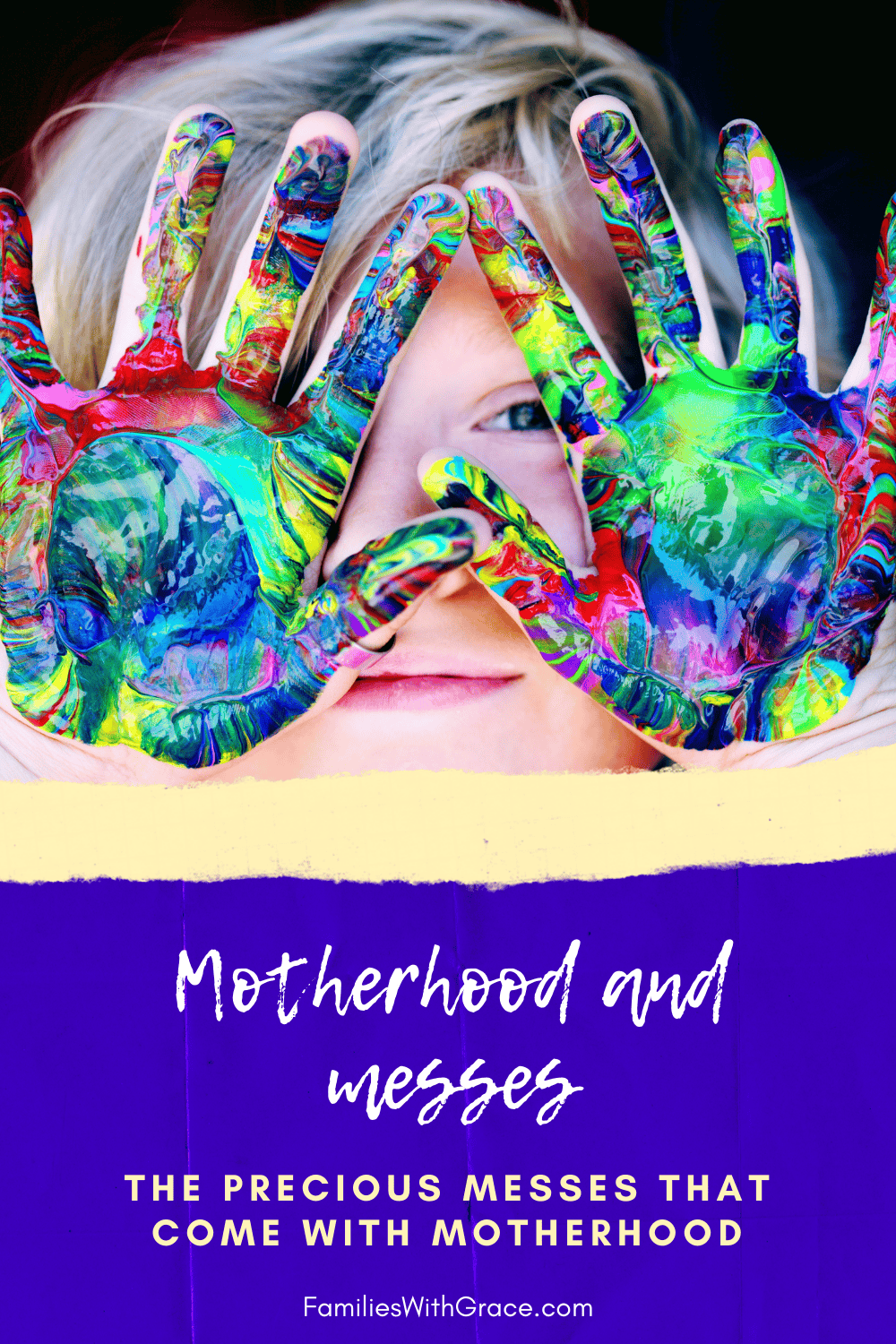 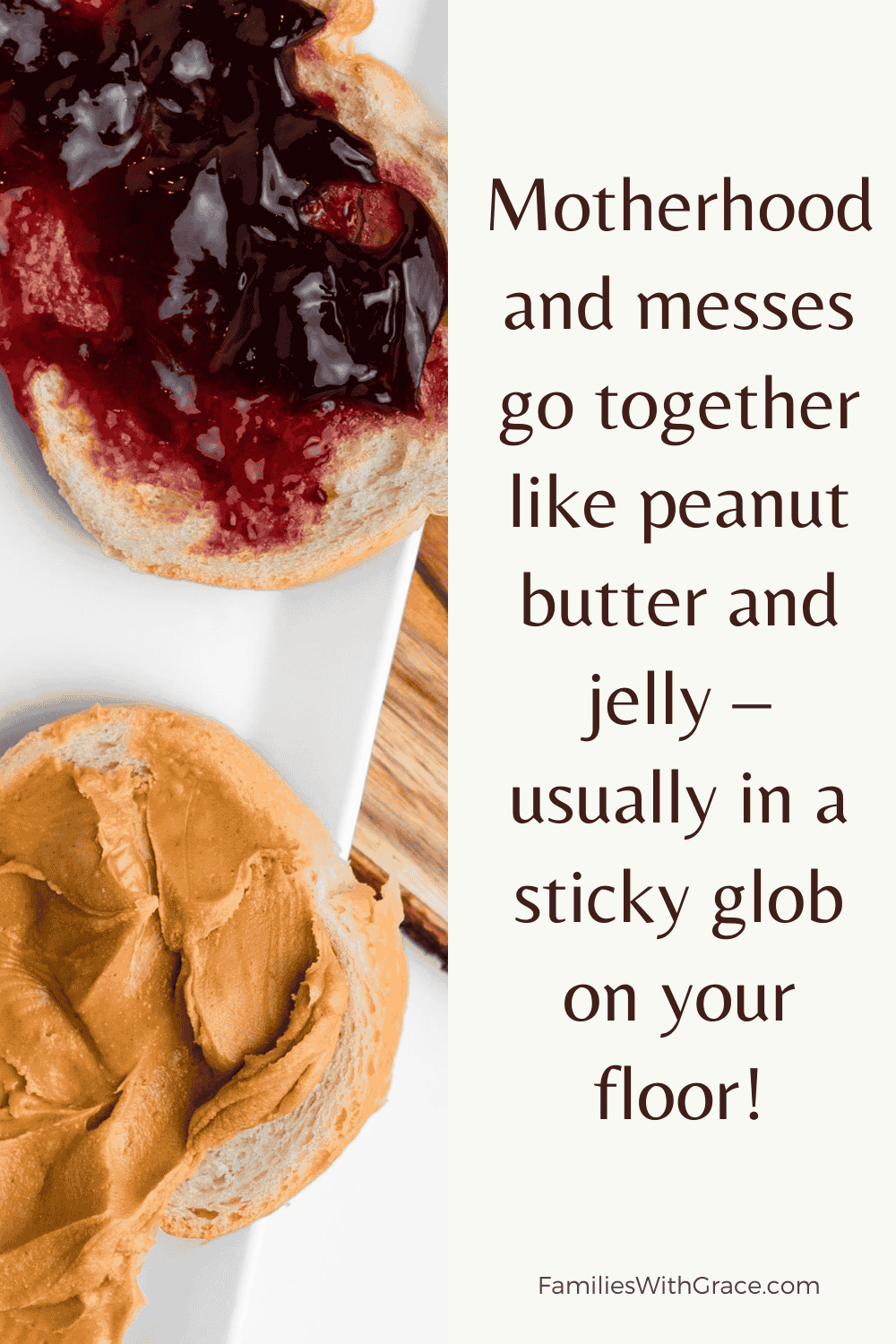 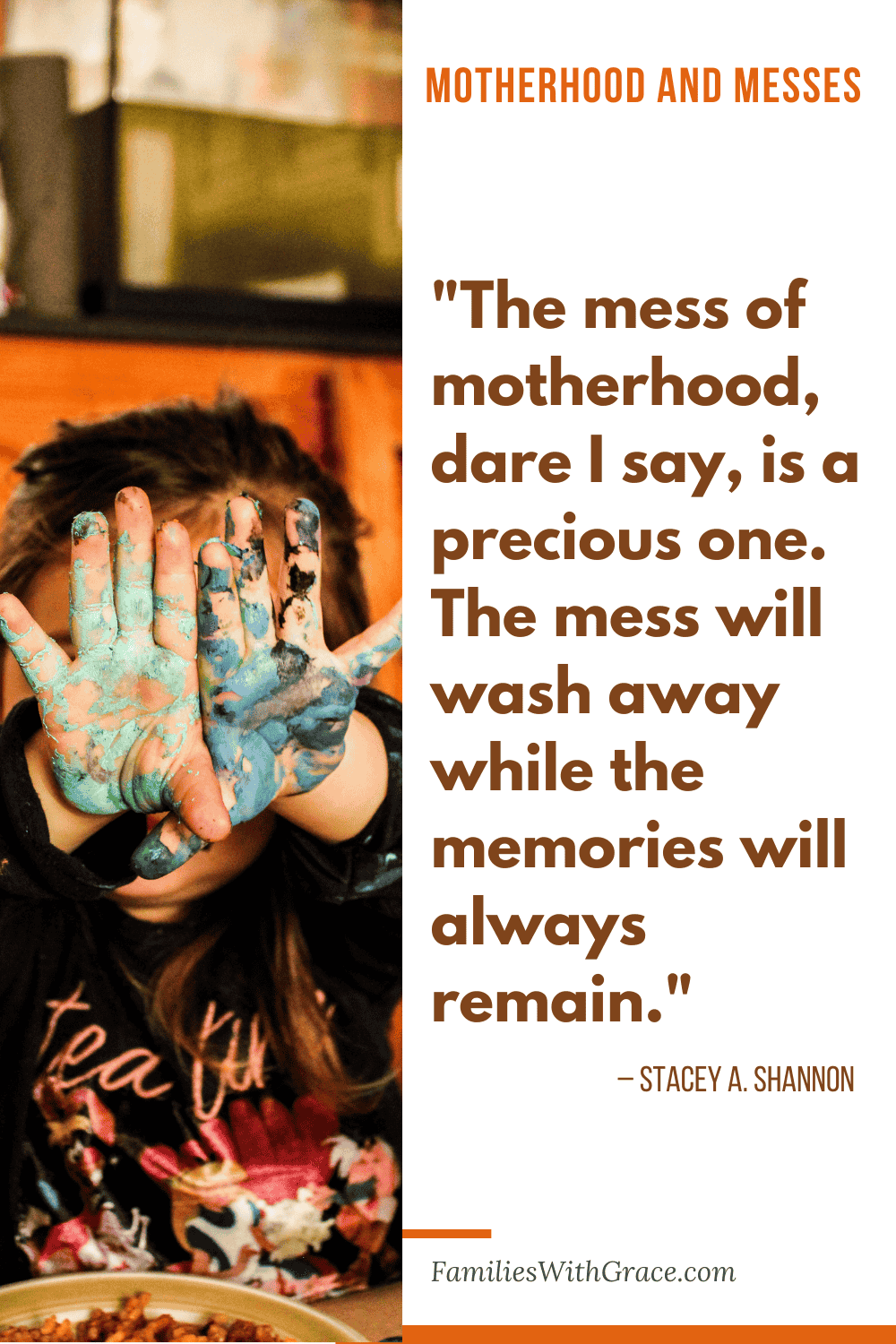 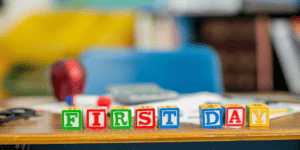 First day of school traditions to start this year 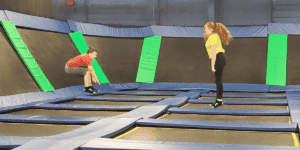